Skip to content
Fellow Officials,
There is inconsistency in the T-O procedure. It is important that all read below until you fully understand what’s required. Discuss with partner at next match to make sure you both are on the same page.
1)  R2 starts a T-O with a double-whistle, moves to side of request, displays the correct T-O signal mechanic in front of chest, and then presents to the R1 the # of T-O’s used by both teams out in front of chest.
2)  R1 also displays correct T-O mechanic and acknowledges R2’s T-O’s used with a head nod. (R1 does not display T-Os used at this point.)
3)  R2 verifies the 1:00 min clock has started.
4)  R2 then confirms scorekeeper(s) has entered the score in the right box for the right team, and that they entered a “T” or a “Tx” in the current “square” prior to next serve.
5)  R2 asks Libero Tracker if the Liberos are In/Out for each team. Pay attention when teams retake their court.
6)  R2 moves to receiving side sub-zone to monitor the clock and each team bench area.
7)  R2 blows a double-whistle warning at 0:15 seconds OR earlier.
8)  R2 observes teams. If either team is delaying under 5 seconds, move to their side to respectfully ask coach/team to “please take their court.” If a team is late to court well after end-horn, R2 respectfully gives a verbal warning to coach that next time a delay sanction may be issued.
9)  R2 from the receiving side sub-zone with teams ready on court, cues the clock operator for the End-Horn and at the same time gives back the # of T-Os used out in front of head to the R1. (No double-whistle after horn.)
10) R1 now mirrors R2 showing # of T-Os used out in front of head.
11) R2 verifies 1:00 min back on clock, scans full court, line judges ready, both team benches for any issues and then gives back the court to R1 with the appropriate hand.
Please make sure your double-whistles are 2 loud short bursts that don’t run into each other.
Please make sure both teams have 6 players on each court before you cue the End-Horn, otherwise wait and let horn go automatic when under 5 seconds.
Attack lines must be solid sideline to sideline. Rule 2, sec.1, Art.5
Ex:  Woodland H.S. has an oversized logo that covers both attack lines. Those areas must be taped! Last night I asked coaches to please tape that area. They complied and used white athletic tape to match the white lines. No problem. Please make sure this is being done for remainder of season.
Centerlines must have some kind of clear 2" representation through a logo. Rule 2, sec.1, Art.4
There does not have to be a solid line through a logo as long as 2 shadow lines show some kind of 2" continuation.
Attached are two examples. BOTH PICS ARE ACCEPTABLE AND NO TAPE REQUIRED.
Thank you,
James Borbas 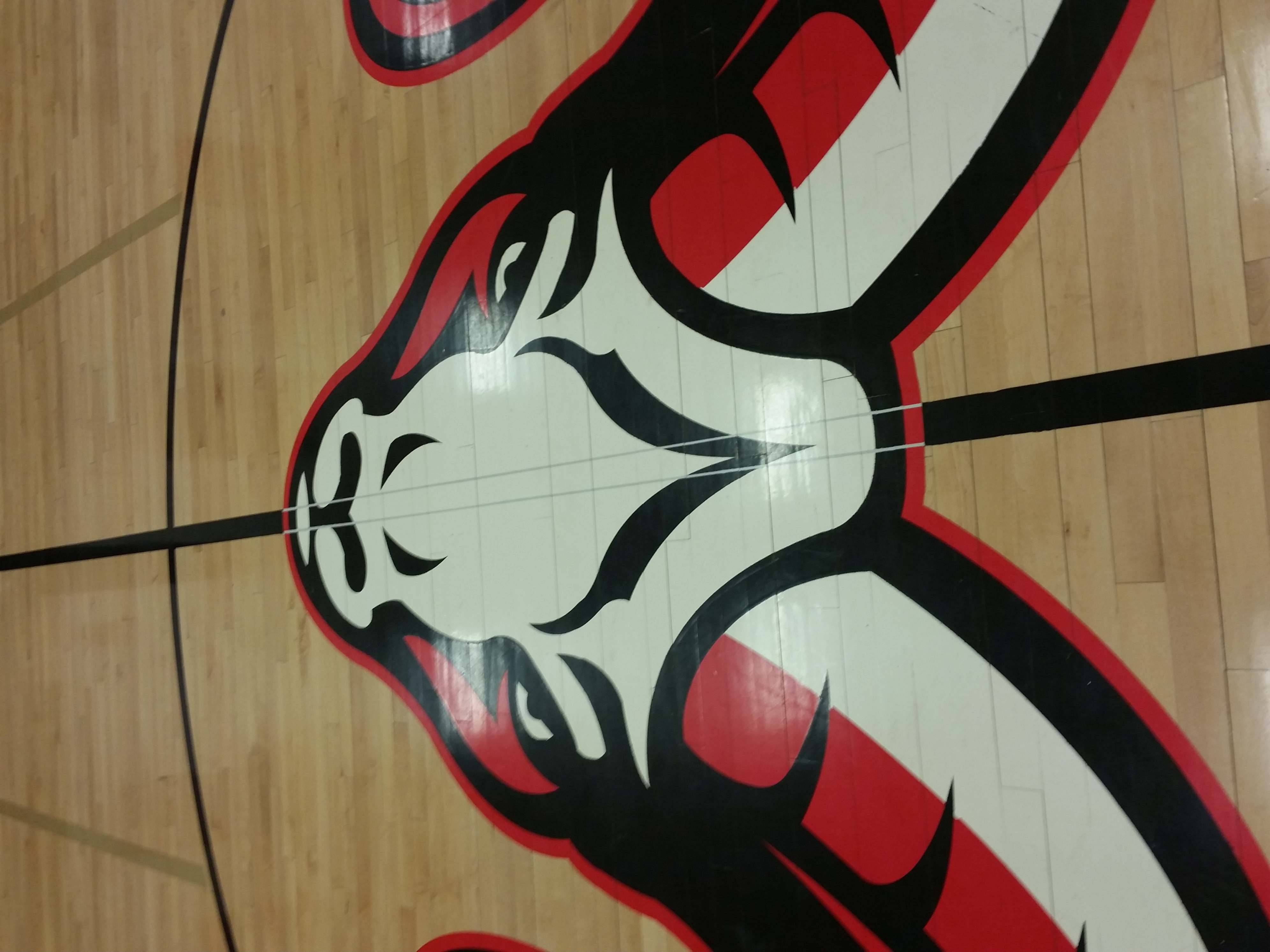 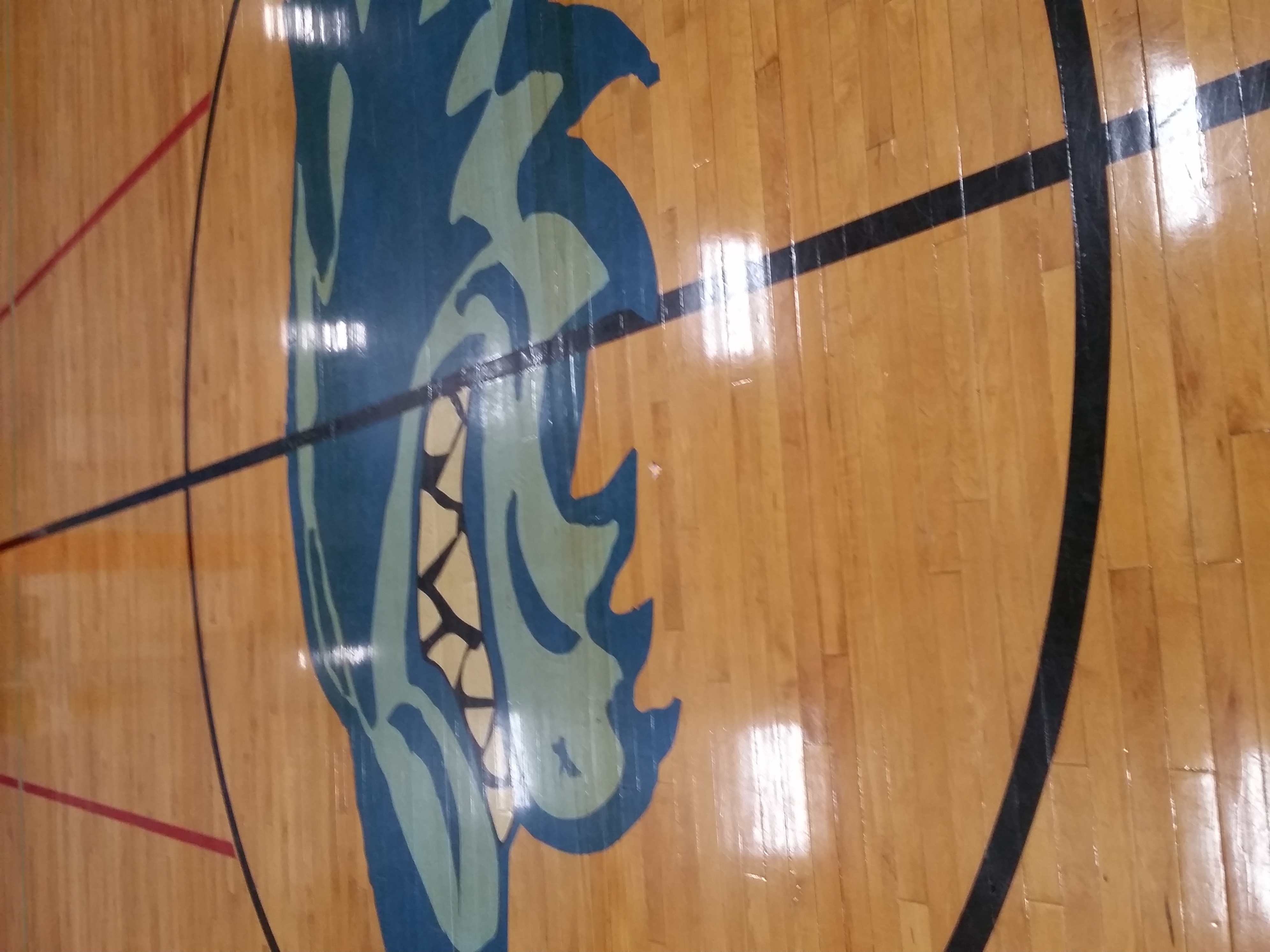 Fellow Officials,
It has been reported to me that some of you have miss interpreted last weeks email and are not allowing side warmups to the “off” team. Side warmups are allowed. Below is a guideline for all to follow:
1) Our state allows the “off” team to conduct a warmup routine in the playable area IF there is sufficient room and both coaches agree to it. The “on” team should have a minimum of 6 feet around all side lines with no obstructions or conflicts. Technically, they have the entire playable area available to themselves if they need it. Most cases teams do not use it all.
2) Most important and prior to pre-match coin toss meeting, observe the amount of space available around sidelines and beyond service line where most side warmups occur. Observe potential safety risks if any. Then ask the home coach if they normally do a side warmup while the opponent has the full court. If they do and the visitor also wishes to do a side warmup, then you should allow it.
3) Some gyms are small, but that doesn’t mean a side warmup cannot occur.
For example: I had a gym last night with about 15 ft from service line to wall both ends. Prior to coin toss meeting, I asked home coach if they do “off” warmups. Coach said yes and I asked visiting team if they would and coach said yes. I said that’s fine. In meeting, I told coaches to make sure your team is closer to wall than service line and when “on” team starts to do serving to quickly move team back to bench area to avoid interference with servers as well as potential concussion to their own players. Both coaches understood and complied. No problem everything went smooth. At times, the “off” team players occasionally got closer to service line but it didn’t create a problem for the “on” team. If it started to, I could’ve easily gone over and instructed the “off” team to move away from the service line if the were interfering with court players. Stay alert.
4) If in the opinion of the officials there is not enough room beyond the service line, but there is sufficient room say behind a bench area and in the opinion of the officials there are no safety concerns, then a “off” team warmup can be allowed there. Again, talk to your home coach before pre-match coin toss meeting. Use common sense.
5) When an “on” team performs a game-play like routine on full court and players may have to run for balls whereby the “off” team inhibits “on” team players from playing those balls, then officials can direct the “off” team to move farther away or cease their side warmup altogether and move from the playable area to their bench area.
6) If a gym is very large like East Haven for example, in the spirit of sportsmanship coaches and officials can agree before hand to allow the off-team to stand well beyond their service line to assist the on-team as ball retrievers for their warmup.
7) Reminder: NFHS safety emphasis this season from August meeting for concussion prevention during warmups.
Example:  During an “on” team serving warmup, I have observed helper players standing either side of the net. This is a safety concussion issue. Tell coach that new emphasis on concussion avoidance during warmups – players are in harms way of getting hit in head from any direction and we recommend that they be moved off court. Simple. All coaches have complied for me.
Finally, I have never had to deny “off” teams from a side warmup, and I’ve been in many gyms around the state. It comes down to observing, talking to coaches ahead of time, and making common sense decisions based on safety and sporting conduct where all parties agree.
When it comes to safety, concussion prevention and potential unsporting situations, officials have broad authority in these areas under preventive officiating measures. It is our job to assess situations and request that coaches/teams make adjustments for the benefit of all concerned.
When you request a coach/team to make an adjustment, make sure you have a good reason ready if asked.
Don’t hesitate to email or call me on any topic.
Regards,
James Borbas